‘The Year of Completion,’ from Two Hearts as One
16021
post-template-default,single,single-post,postid-16021,single-format-standard,bridge-core-2.5.4,ajax_fade,page_not_loaded,,qode-child-theme-ver-1.0.0,qode-theme-ver-23.9,qode-theme-bridge,qode_header_in_grid,wpb-js-composer js-comp-ver-6.4.1,vc_responsive,elementor-default,elementor-kit-10 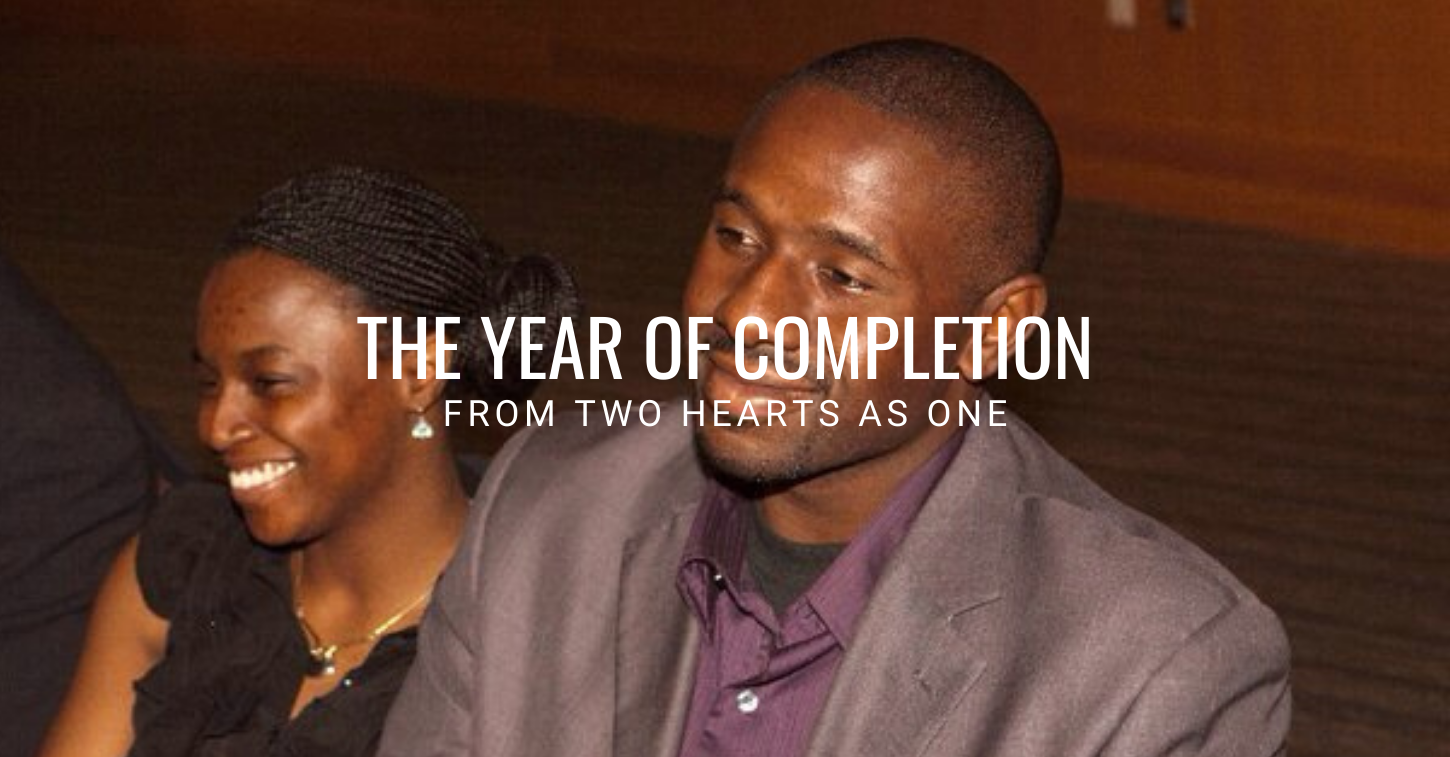 27 Sep ‘The Year of Completion,’ from Two Hearts as One

In 2017, a storm by the name of Hurricane Irma brought about much displacement in its path. Many lost their homes, and many lost their loved ones. In fact, the storm was so big that it nearly covered the entire state of Florida. We had never seen a storm so massive, and we, too, like everyone else evacuated in an attempt to avoid the storm. But, you see, in life, there are some storms that are unavoidable, and no matter what you do, you will still find yourself within its path. These storms can bring about displacement and will often leave behind a path of destruction within your life. We’ve seen the measure and magnitude of debris left behind after many of these storms, and we’ve seen the hard work and determination that it takes to rebuild. You don’t know the magnitude of destruction and displacement until it affects your home, and you don’t know the measure of its brokenness unless you’ve been made to feel it. You see, displacement is a storm within itself; it causes you to feel unsettled, and there is no comfort where there would normally be a comfort zone.

There are many details of this story that we would like to share, but tonight we are going to begin here. Some of the details and experiences within these chapters have been very challenging and difficult for us to both think about and talk about – privately and openly. In fact, as we write to describe them, we still find it very challenging to begin.

In early 2017 God made me a promise, and the magnitude of this promise was so big that it seemed impossible. I hesitated and pondered for some time before I shared the details with my wife, because I wanted to be sure that this was from God and not from me.

After having returned home from mandatory evacuations, our house had still been without electricity – and had been for a while – due to Hurricane Irma, and we also found that damage had occurred to the back of our home where the sunroom exists.

In small talk one day in a telephone call, one of the representatives of our mortgage company chatted about the recent storm as I asked them about the details needed to set up automatic mortgage payments. I’d mentioned the disaster effects of the storm and lightly mentioned our findings when we had returned from evacuation. They mentioned a program intended to safeguard homeowners as they took care of costs incurred from these types of disaster situations and further asked if I wanted to be passed to the department that handled such. I hesitated, then accepted their suggestion. Although we had already paid the coming month’s mortgage early, the mortgage company’s program applied the natural disaster protection and began sending paperwork to confirm and setup such safeguards.

At the culmination of the natural disaster protection, an additional contractual agreement (in our case, a subordinate mortgage) was to be setup and executed by the mortgage company to ensure that the safeguards were correctly put in place. This agreement lays out and identifies the responsibilities of the mortgage company and the customer, i.e., the mortgagee and the mortgager, thus holding and binding the two to the terms within. We honored our part in principle and in payments, but our mortgage company did not. This set in motion an endless cycle that would lead to many grave injustices.

For the past 3-4 years, we have had to battle against our mortgage lenders in their pre-foreclosure and foreclosure attempts. In their failure to correctly process, address, and apply payments and paperwork, they attempted to unjustly take what did not rightfully belong to them.

I remember checking our mailbox early one Sunday morning and opening mail which threatened foreclosure. I was overcome with fear and breathlessness, and I cried our entire 45-minute ride to church. Because of this such injustice, these feelings became a regular part of our lives – the sense of fear, anxiety, and hopelessness presided. This has been a storm of despair, one of injustice and great displacement, because for some time, our happiness, joy, and peace have been displaced by this grave injustice.

Yes, it is challenging to think about it, talk about it, and even speak outwardly about it. But I remember the words of my husband, and God’s promises are becoming true.

For many days and nights over these few years, we lived our lives with bags packed as a “just in case” measure. We both often wondered what would happen and what might we take in the spur of the moment, if that should ever happen.

I remember the way I felt when my mom passed away. I wanted to hide and even die, and, in fact, crawl up under a rock. Your home is a place of safety, and your home is a place of refuge. But the very place that would offer me these comforts was itself vulnerable in my vulnerability. I remember my wife presenting something to me concerning the mortgage situation the day after my mom passed away, and I could no longer be optimistic, but I was instead hopeless.

You see, it greatly saddened me, because I am normally an optimistic person. One of the things that I am able to do best is to comfort and encourage my wife. In this place I felt as though my words would be a lie because I had no words of comfort, and there was nothing I could say that would encourage her or encourage me. I have never known such a dark place of hopelessness and despair. I never would have imagined that something so unjust could and would have happened.

I never would have imagined that my wife would be overcome with fear and breathlessness as she shed tears one Sunday morning on the way to church due to this injustice that was being committed.

I just simply never could or would have imagined.

God has granted us with a great team of lawyers, and we have already begun to see the progress of their work. It is a wonderful thing to know that you don’t have to fight alone. So, we would like to speak to the individual who might be doing so at this time. God will bring about justice when injustice takes place within your life. Don’t be weary, and don’t give up, because one day things will get better. We would like to speak better over you, and we prophesy to your circumstance. Every wrong will be made right, and every injustice will be conquered. You will know victory, and your adversaries will know defeat. May you be empowered to conquer and overcome, and may you know victory, in the mighty Name of Jesus, Amen!

We bid you all blessings and favor, from Two Hearts as One, Seneca and Kaye Howard❤.